In light of ongoing austerity measures, due only to get worse, the Cut the Crap Collective introduces a radical discussion space, unashamedly founded on anarchist principles – interested in collective action that works for all. It welcomes anyone who wants to communicate, learn and teach. Hosting workshops, film screenings, discussions and serving hot, tasty meals with the aim of creating a space where people can get together to openly talk and organise for a better future! 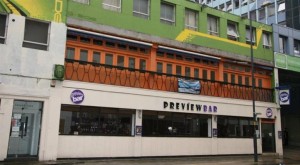 The nuilding squatted for the first Everythings Not OK Cafe on Fairfax St, below Union St in the centre.

Following the eviction of our first building Preview Bar in December 2012, our plans to host a temporary community cafe run on anarchist principles in Bristol over the weekend have been scarpered for now. Since Avon & Somerset Police decided to raid Everything Is Not OK Cafe on the morning of Friday 14th; evicting the building and arresting the five occupiers, we have had to shelve plans for now.