Rumours of our Demise Have Been Greatly Exaggerated!

As you may be aware, our plans to host a temporary community cafe run on anarchist principles in Bristol this weekend, have been scarpered after Avon & Somerset Police decided to raid Everything Is Not OK Cafe on Friday morning; evicting the building and arresting the five occupiers.

Plans were afoot to host a temporary community cafe run on anarchist principles in Bristol this weekend. On Wednesday night a crew of people entered the unused Preview Bar on Fairfax Street near Broadmead and secured the premises: Everything Is Not OK Cafe was born!

They were shocked to discover a disused building ripe with potential. Thursday saw a flurry of work as people involved in the project began tidying up the space in order to open it up to the public on Friday for talks, discussions, films and art related to the current political climate.

When the owners of the property turned up they discovered that they were unable to enter the building. They called the Police who arrived, and after threatening to arrest people outside for not displaying a Section 6, told the owners that those inside where completely within their legal rights to occupy the building.

Security kept a constant presence outside the building. More Police turned up eventually but it was merely the local beat cop – PC Steven Bell – who was trying to play the “nice cop” routine, which we saw right through as always. He took particular exception to the banner hung outside which read: “Open to everybody (except cops).”

Another visit by the owner led to a rather interesting discussion where the possibility of a license to stay was talked about in-depth between the owner and one of the occupiers. The owner agreed to return in the morning to discuss the arrangement further.

Believing that we were safe, having made our presence aware to both the Police and the owner, we settled down for the night and started making plans for the weekend. Around five people remained in the building over night.

At around 12:30AM Police – some in full riot gear – entered the premises through several doors at once. They arrested everybody inside the building claiming to arrest them on charges of “abstraction” (theft of electricity), despite any evidence to the contrary. This was clearly not about who’s paying the bills.

Estimates put the number of officers on the scene at around 60 with roughly 20 in riot gear. There were seven Police vans parked around the building. Passer-bys and supporters were criminalised when they attempted to investigate.

One member of the collective managed to meet the owner on the scene at around 1AM where he discovered that the eviction was apparently the work of Avon & Somerset Police, and the Police alone. The owner was still keen to discuss a formal agreement with the former occupiers. Some members of the collective met up with the owner Friday to further discuss the plans.

All five people were taken to Trinity Road Police Station where they were kept over night and interviewed in the morning. The last of the arrestees were released around 5PM after spending over 12 hours in police custody! There were no charges, and people were bailed to return in January/February to face possible charges of abstraction and criminal damage.

The future of the project is up in the air at the moment though rumours of our demise have been greatly exaggerated! We are still planning on carrying on with Everything Is Not OK Cafe at some point in the future (possibly early next year)! But in what form or location is unsure as of yet, please keep your ears peeled for more information!

What to do with all the food…? 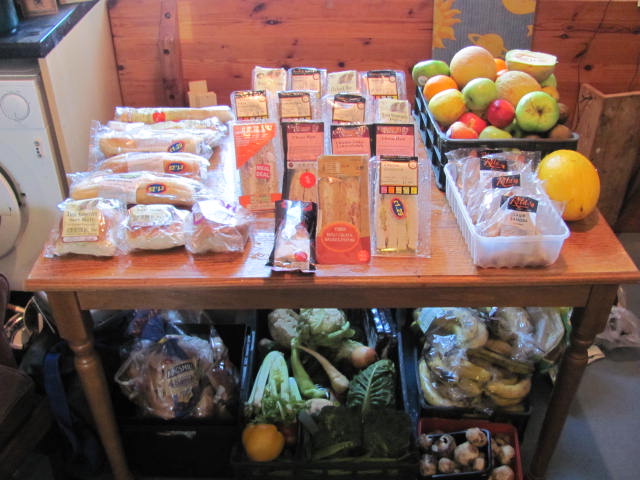 Just have to eat it I guess!

Got raided Thursday night. 5 nicked, all no commented, no-one charged. We’ve had to postpone for this weekend though. Stay tuned… 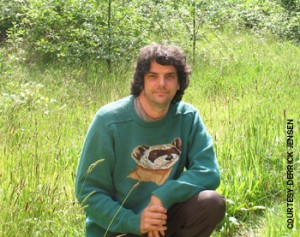 Time is short, the hour is late.

Techno – fixes and pop environmentalism are not going to save the day.Now is the time for a real resistance movement to save the planet.

This is a central theme in the work of  deep green anarcho-primitivist writer Derrick Jensen. His work also covers such wide ranging subjects as child abuse, rape, patriarchy, racism, education, prisons,surveillance, violence, war, religion and an anti- science perspective. These he argues, are all pathologies of civilisation and are not intrinsically human behaviours.

Jensen is a prolific and emotionally compelling American author who is considered mandatory reading for those fighting for planetary and social justice. Through piercing analysis, witty and elegant prose, Jensen has been hailed as the philosopher/ poet of the deep green ecology movement and an “original voice of sanity in a chaotic world” (Howard Zinn)

Jensen is the author of over 15 books of which End Game is his most famous. We will  have a look at some of the premises of End Game as a basis of the discussion.  Any one with additional knowledge of Jensen’s work is most welcome so we can draw on a wider perspective.

For all you lovely folk that want to help the cafe, but maybe don’t know how, we are currently needing a few things that you might just have lying around or are capable of helping us with. Like……

-All food donations are welcome, we are running a vegan cafe but some of us go by the saying ‘get a grip its from a skip’. We are also going to spending money on stuff like grains, pulses and vegetables so if you would like to give us some of that i’m sure a free meal will be in order for all ya’ll nice folks!

– Finally, a van and driver for Friday morning to move some food around, this wont take long and petrol can be covered x

If you have any of the things above or stuff we haven’t thought of yet please leave a comment or email us at  cutthecrap@riseup.net

Thanks guys! your soo awesome!

Self Defence Training for the revolution. 16th december 3pm 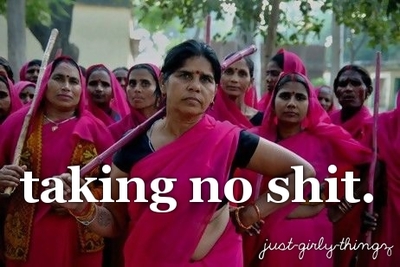 Leaflets for the Everything’s Not OK Café 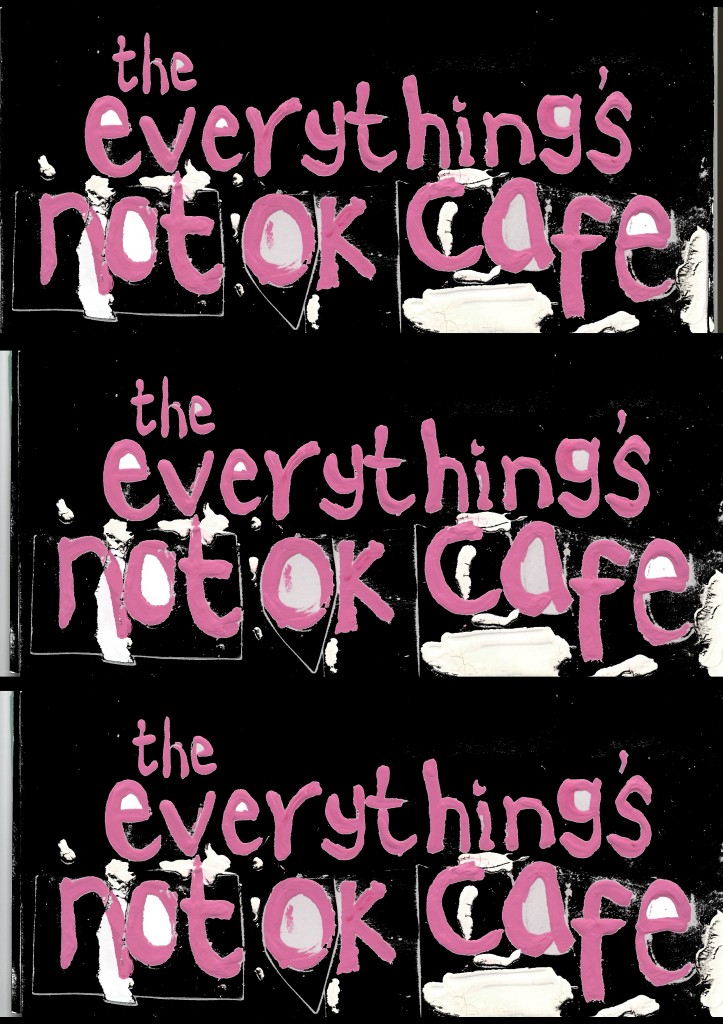 Front of double-sided leaflets for the project. Click image for PDF to distribute. 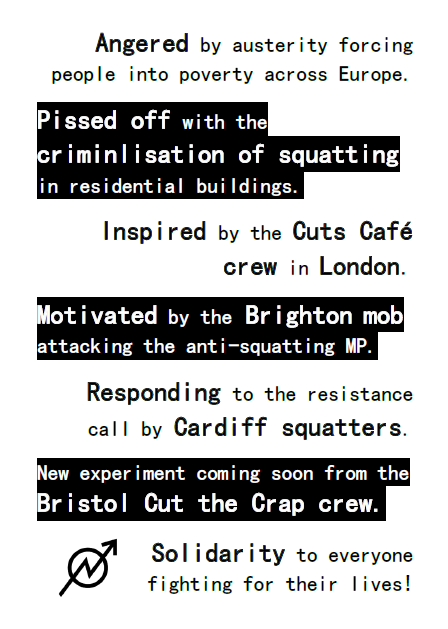 Click on image for PDF to distribute (poster for other cities) 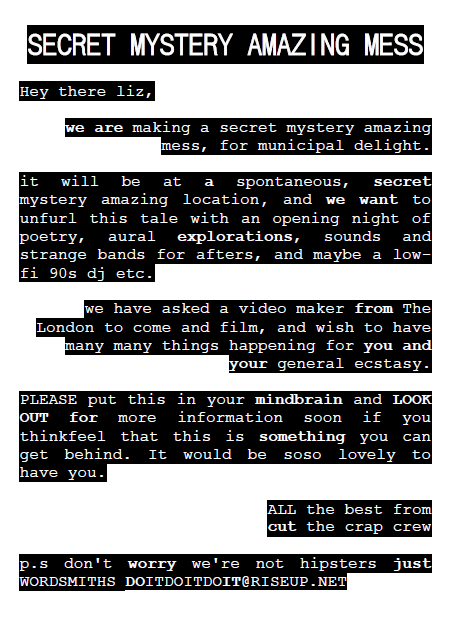 Click on image for PDF to distribute cryptic message.

More posters on there way!