We are delighted to announce the UK premiere of a photography exhibition of the ZAD, an anarchist anti-airport collective in France. Like Grow Heathrow, the ZAD is a post-capitalist protest site in the proposed site of an airport. breathtaking photos that have never been seen before tell the story of the tens of thousands of everyday people who are resisting eviction and fighting for climate justice and the right to stay on their land, in their homes.

For Bristol-based brizzlers, we are delighted to announce that the highly recommended exhibition will be available on Sat 15 and Sun 16 December in Bristol.

La ZAD, or Zone A Défendre, is located in North West France, 15 miles from Nantes. To some, it has been a home for themselves and generations before, for others it is where they plant seeds, make music, build bikes, and live in the forest. The ZAD, or Zone to be Defended is formed by the land around the town of Notre Dame de Landes, where the proposed airport is planned to be completed by 2017. The existing airport of Nantes is not used to full capacity, and many associations have disputed the usefulness of a new airport, and have highlighted its pollution and price tag. Farmers and residents have successfully fought this project since its was first proposed 40 years ago, leaving it repeatedly shelved. Its new advocate is Jean Marc Ayrault, the former mayor of Nantes and current Prime Minister of France.

Many residents had already left by 2009 and their empty houses, due for demolition, were occupied by activists opposed to the project during the French Climate Camp in 2009. Tree houses and cabins were also built to protect the forest and woodland, and communal allotments were established on unused land. A bakery was built by a Nantes baker that decided to leave his job and join the community, and a goat farm was also made on reclaimed land. The decision to remain on the land by farmers and residents was an act of resistance, just as was the decision for activists to occupy. However, despite this opposition, evictions began at 6am on 16th October 2012 and nearly all these newly occupied homes, along with many of those of original residents have been destroyed. Around 500 police were mobilised from across the country for ‘Operation Caesar’, and an estimated €500,000 has already been spent.

However, the level of resistance has extended the 3 week operation to – at the time of writing – 5 weeks, as thousands of people travelled to the area to resist the evictions. Whilst those involved in direct action constructed and manned barricades, farmers and neighbours contributed daily with food, clothing and places to sleep. This union of activists and anti airport campaigners was uncommon before, yet since evictions began it is constantly growing, and during the reoccupation on 17th November, 40,000 people re-occupied the ZAD, supported by 400 tractors. Meeting rooms, dormitories, and kitchens have been built, and people are constructing new homes together.

The construction company Vinci is set to start work in 2013, and the amount of publicity and state money already spent means it will be difficult for them to turn back. However, those opposed are determined to act until the end, and considering the extensive support from people near and far during evictions and the reoccupation, it seems that the story of La Zad is only just beginning.

Cut The Crap Crew Presents: The Everything is Not Okay Café 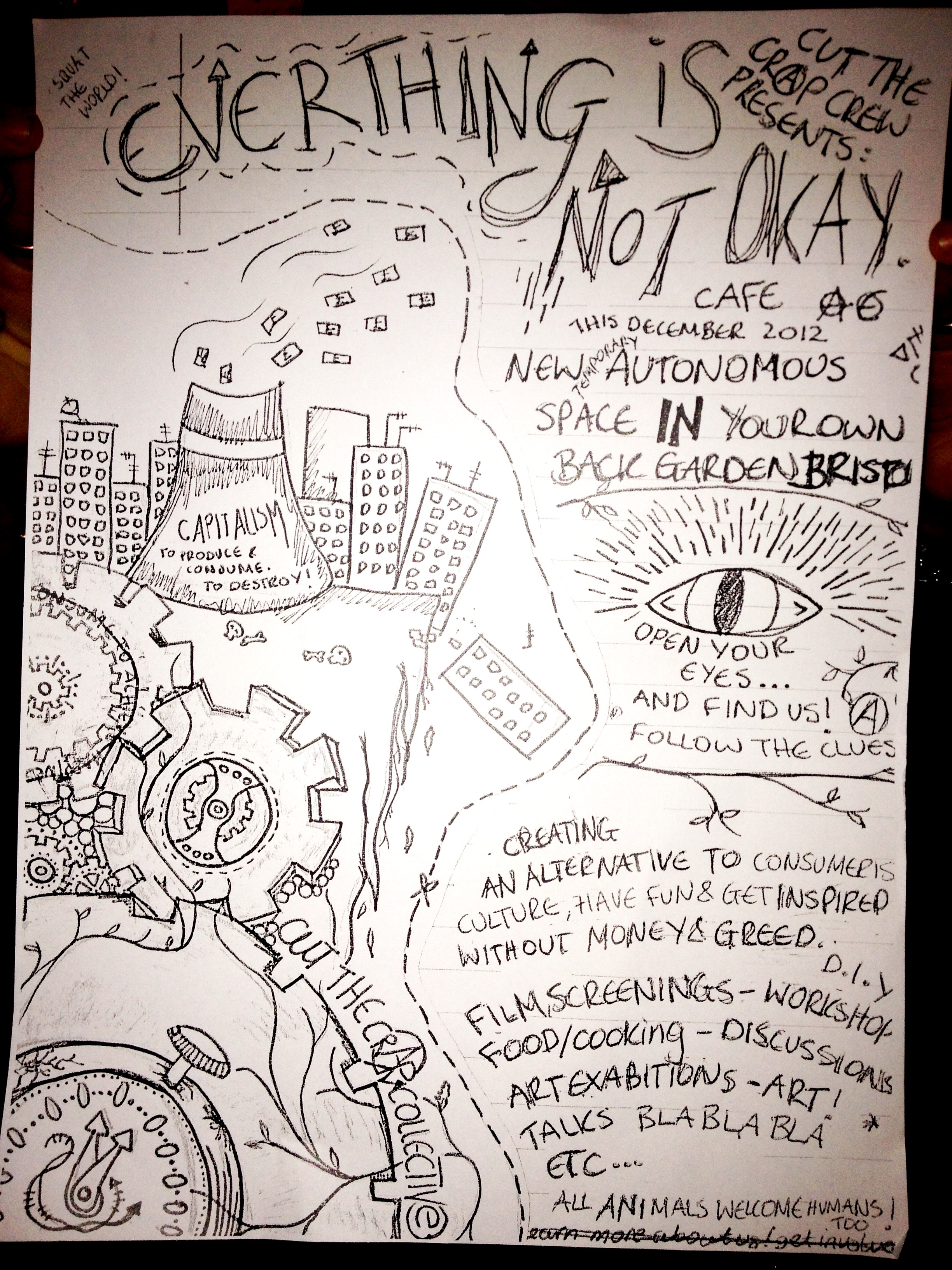 Is it just us or is everything not OK?

In light of ongoing austerity measures, due only to get worse, the Cut the Crap Collective introduces a radical discussion space, unashamedly founded on anarchist principles – interested in collective action that works for all. It welcomes anyone who wants to communicate, learn and teach. Hosting workshops, film screenings, discussions and serving hot, tasty meals with the aim of creating a space where people can get together to openly talk and organise for a better future!